Miscellaneous reviews of our concerts

"What a superb concert you gave us last night..........The choir was superb as were the soloists. The whole thing came together beautifully and the whole programme was beautifully balanced. .................... We spoke of nothing else for the rest of the evening - and I'm still buzzing!"

"Thank you for a wonderful concert this weekend, it was lovely to perform with you again and in such a beautiful setting of Southwell.
Thank you for a special, beautiful day - an experience to cherish. Bravo!"
From an audience member......

.......We so enjoyed the concert. My concert buddy was entranced and I was delighted with her reaction as she had missed your concert at Barnbygate.

..........  The entire concert was a delight and we’ll certainly keep our eyes peeled for the next one.

“Piety, Jollity and a Ditty for a Deity” - Concert at Newark Music Club at Barnbygate, Newark with Parnell Phil

“…breathtaking, and a perfect start to our season.” ( Newark Music Club)

“The professionalism and skilful performance [of such a variety of pieces] was wonderful to hear.” (Newark Music Club) 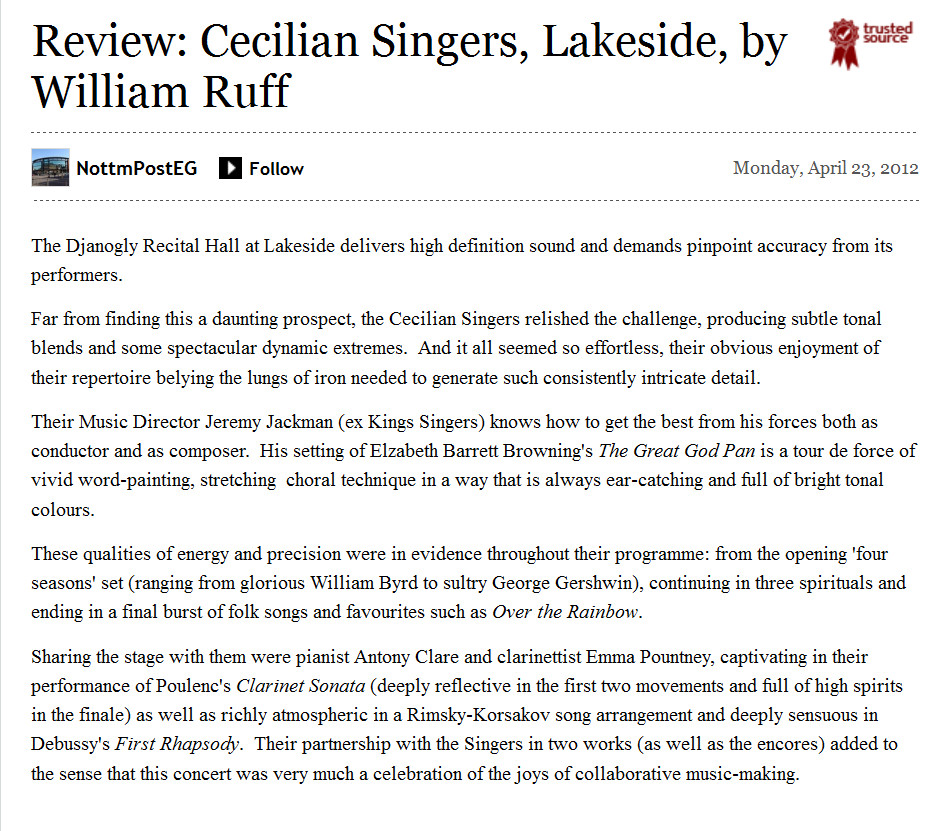 ‘Mixed Doubles’ – Joint Concert with the Jay Singers of Norfolk

“……..This was their second collaboration and it left us hoping there will be more......”

“……..We were privileged to hear the Cecilian Singers, having returned from touring Austria. This choir is elite, displaying supreme purity of tone, precision and effortless accuracy. Exquisite!.....”

“……..The Cecilian Singers have always attracted top-flight artists to perform with them and have turned in some very impressive performances over more than two decades……”

“………The Singers, under Jeremy Jackman, sang with finesse and confidence……”

“………This was a delightful coming-of-age celebration that combined a wide range of music with high standards and a lively sense of enjoyment.

Part-songs and arrangements of popular, folk and baroque vocal items showed the versatility of the Cecilians, who, under their conductor Jeremy Jackman, produced disciplined, well-balanced and warm-toned singing that gave a great deal of pleasure……..”

“……..Not surprisingly, this concert was a sell-out as the combination of Emma Kirkby, Anthony Rooley, the Cecilian Singers and the first modern performance of a 300-year-old work was an irresistible one…….”

“…….The choir produced its customary warm, well-balanced sound, with the sopranos adopting an almost operatic vibrato at times……”

All the forces were guided with insight and understanding by Jeremy Jackman, The choir was superbly balanced and integrated with a rounded tone quality that never once became coarse or vulgar. The varying emotions of the choruses and chorales were very movingly conveyed, the final section being especially affecting……”

Antwerp Cathedral of Our Lady:

“…….The Singers’ performance was greeted with a standing ovation by the large congregation present………”

“…….The Singers, led by Jeremy Jackman, performed the four Part Mass by William Byrd from the high altar of the spectacular Antwerp Cathedral of Our Lady. Although located over 100 yards from the audience, the clear tones of the choir soared undiminished through the Cathedral, delighting those present……”

Concert at the Art Gallery, Leicester.

“……..One of the most distinctive groups among many excellent choirs in Leicester is The Cecilian Singers, a small, extremely well-balanced chamber choir offering a high standard of performance, combined with a wide ranging repertoire.”

“……..the high spot of the evening was a first performance of a Suite of British Folk Songs, arranged by the trombonist of the Philip Jones Brass Ensemble, Roger Harvey.

The performance of this very witty and beautiful piece was stylish and precise and produced some of the finest singing from the Cecilian Singers. The blend and dynamics from this Leicester choir were excellent throughout the evening………”